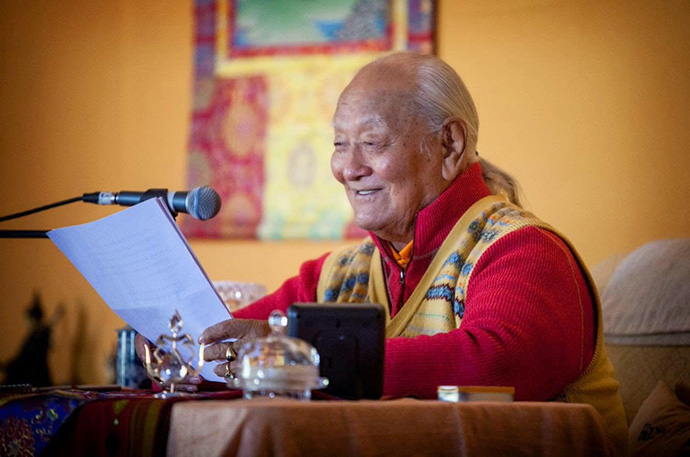 Chögyal Namkhai Norbu (1938 - 2018) was born in Derghe, the eastern part of Tibet. As a child he was recognized as the reincarnation of the great Dzogchen Master Adzom Drugpa (1842-1924) and later by the sixteenth Karmapa as a reincarnation of Shabdrung Ngawang Namgyal (1594-1651), the first Dharmaraja of Bhutan. While he was still a teenager he completed the rigorous programme of traditional studies, receiving teachings from some of the greatest Masters of the time. In 1955 he met Changchub Dorje (1826-1961), his main Dzogchen master whose lifestyle and way of teaching have deeply inspired him throughout his life.

In 1960, following the deterioration of the social and political situation in Tibet, he moved to Italy on the invitation of the well-known Orientalist, Prof. Giuseppe Tucci, and contributed to giving a concrete stimulus to the spread of Tibetan culture in the West. In the early 1960s he worked at the Ismeo (Istituto per il Medio e l’Estremo Oriente) in Rome and later on, from 1962 to 1992, he taught Tibetan and Mongolian Language and Literature at the Istituto Universitario Orientale in Naples.

His academic works reveal a profound knowledge of Tibetan culture, continually nurtured by his steadfast determination to keep the extraordinary cultural patrimony of Tibet alive and functioning. After teaching Yantra Yoga in Naples for several years, in the middle of the seventies, Chögyal Namkhai Norbu started to give Dzogchen teachings which encountered a growing interest first in Italy and then throughout the West.

In 1981 he founded the first centre of the Dzogchen community in Arcidosso in Tuscany and gave it the name Merigar. Over the years thousands of people have become members of the Dzogchen Community all over the world. Centres have been created in the United States, in various parts of Europe, in Latin America, in Russia, in Australia and in China.

In 1988 Chögyal Namkhai Norbu founded ASIA (Associazione per la Solidarieta Internazionale in Asia), a non-governmental organization that is mainly active in meeting the educational and medical needs of the Tibetan population.

In 1989 Chögyal Namkhai Norbu founded the Shang Shung Institute which has the task of safeguarding Tibetan culture by promoting and spreading knowledge of it.